Now the glasses are here… more than a hundred million, more than 5 million Oculus Gear and more than a million Oculus Go, are waiting for the stereoscopic content… And the most curious thing is that this time it is not necessary to use special 3D glasses, because the GEAR VR units are stereoscopes in themselves, so we just have to create the content.

The Nodal Ninja Stereo Kit is an important step forward, as it defines the pseudo-nodal alignment, in which both entrance pupils are aligned on the perpendicular axis and in height and are only misaligned on the lateral axis, i.e. the NPP of the RIG, coincides with the midpoint of the hypothetical segment that joins both nodal points.

Now the circle is closed, we have several capture techniques, we have the necessary software and finally we have the hardware we needed, an important fact so that we can standardize the capture, experiment, discover and share our best results.

In recent years we have witnessed a profound transformation of panography, the appearance of one-button cameras has socialized the technique making it affordable for consumers who are delighted to see their photos and videos on VR Gears.

And at the same time, the industry is perfectly aware that VR displays Gear´s are stereoscopic systems, and knows that using two displays and placing the same image on both is a waste of the fundamental performance of the stereoscope, and that is why they have been trying for so many years to find the perfect VR stereoscopic video camera.

Stereoscopy has reawakened in its original format: the “Stereopair” with the only difference that instead of using backlit slides we now use digital displays, it is now in colour, and you can look in any direction, but the stereoscopic feeling is the same as 180 years ago….

So why not, a one-button, 360° stereoscopic camera, made using two two-lens cameras each?

The answer is simple, it is not possible because one camera sees the other, but by reducing the FOV a litle we can eliminate the side areas, and this way it is possible to take photos and videos in VR 180 mode, and that is why the industry took a step to the side, and introduced stereography without saying it, and went from 360º to VR 180º.

Rotational stereography consists of obtaining the parallax by moving the entrance pupil in the perpendicular axis, leaving behind the NPP the RIG that would be its geometric center. Later on we will use images 1, 3 and 5 to compose the left panorama and views 2, 4 and 6 to compose the right panorama.

As photographers we know that using 8mm optics, we can create an equirectangular panorama using a 120º base. However most Video VR cameras use a 60º base and therefore mount six optics, which is the minimum number to create a stereoscopic panorama using the “rotational” stereography technique. 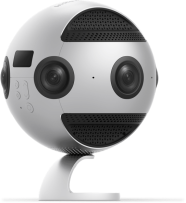 Other VR video cameras use the “side-by-side” technique, using 8 cameras such as  “Vuze”, divided into four pairs, or 16 cameras divided into 8 pairs, such as the “Samsung Round”.

In this case, the interaxial distance is simply a matter of measurement, because it uses the capture that photographers know as “parallel”, which allows us to compose the two spheres separately with a better 3d result.  In these systems the parallax is obtained in the horizontal axis, but also due to the configuration of the camera the entrance pupils are also misaligned in the longitudinal axis. 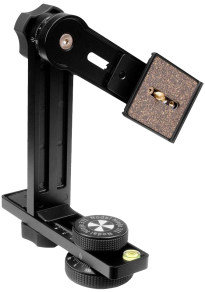 But a video frame is a “frame” and not a photograph, and now that we know how one-button stereoscopic cameras work, we’re going to improve their capture.

In the case of the cameras that use the “rotational” technique, we observe that the “Obsidian Kandao” or the “Insta 360º” mount six optics (60º), or 8 (45º) in the case of the “Insta Titan”, but at a photographic level we see that the best rotational capture is obtained using 12 cameras, which in our case we simulate by using a 30º rotation base.

In the case of side-by-side video capture, we observe that the “pseudo-nodal” alignment is erroneous due to the basic law of impenetrability, since the alignment of the entrance pupils moves in two axes; however, when making this capture from a photographic point of view, it only misaligns in the lateral axis, which translates into a correct stereographic composition. The same happens with the Samsung Round and its 16 cameras, which in the final photographic level are 8 stops (45º) using two cameras.

In short, it can be said that any content generated by a VR video camera can and should be improved using traditional photography, so in stereopanoramic photography, the human factor will always be necessary!

Since steriopsis is a neuronal sensory perception, it can only be measured by statistical comparison, and there are many people who, although they have a healthy optical system, are not able to perceive this magic.

The way to check steriopsis is the use of tests, either in polarized or anaglyph format, but colour glasses (Red/Cyan) are commonly used in stereography, and I recommend it for your daily work.

If using anaglyph glasses, and you can tell the order of distance of the first line images, your stereoscopic visual acuity exceeds the average.