Stereopanography requires knowledge of the two techniques that compose it, so it is necessary to know how stereography works before attempting to link it with panography. The fundamental laws of stereography apply to stereopanography, although some of its rules have to be transgressed and others adapted to the 360º environment. 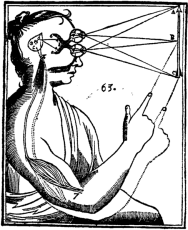 The steriopsis is the neuronal capacity that allows us to calculate the distances to be able to interact with. We know the mechanisms that produce it, the binocularity, but it is unknown how the cerebral cortex generates this illusion, or why some healthy people do not perceive this sensation.

Stereography Is the graphic representation of the technique that allows us to capture images using the characteristics of human binocular vision to recreate the illusion of depth. By capturing two slightly different images and presenting them to each of our eyes, the cerebral cortex fuses both images creating the three-dimensional illusion. 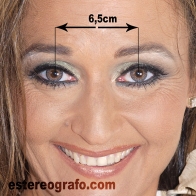 The interpupillary distance of a human being is the distance that separates our corneal reflexes, being different between ethnicities and sexes, but standardized in 6,5cm.

The interaxial distance is the one that separates the optical centers of the lenses of our stereoscopic camera. 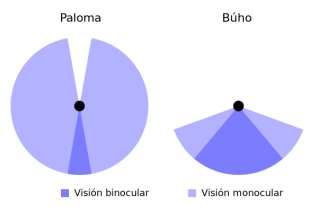 We call binocular vision the use of two eyes that send information to our retina with a slight disparity, the so-called paralax, which allows us to calculate the distance to objects in our environment. This function has evolved in different ways in animals according to their capacities, producing a greater evolution in predators than in the prey that need a greater visual field for observation and continuous monitoring. In the case of a pigeon, its eyes are located on the sides of its head and its visual field is almost 300º, but its stereoscopic capacity is reduced to a small area in which the visual fields of both eyes are superimposed on the front.  For its part the Owl is more pending to hunt than to be hunted, which is why its eyes look at the front and its stereoscopic visual field is much wider. 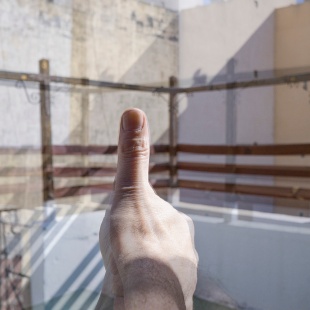 Let’s see how binocular vision works in humans; stretch your arm and raise your thumb and look at your nail, you will feel how both eyes look inwards “convergence” so that only one finger appears, while you will see the background with double image (divergence) and blur. 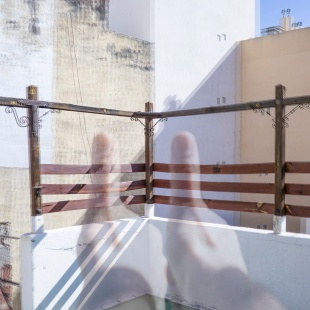 If you look at the background and focus, your finger will look double and out of focus.

What happens is that our interpupillary distance is too high to merge the different planes. 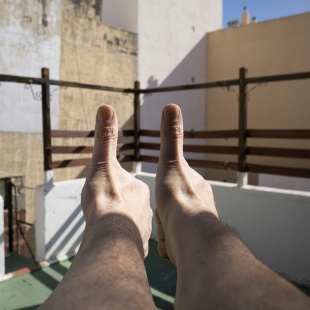 The double image is known as retinal disparity and the distance between those two images; horizontal parallax.

We know as accommodation to the system of focus of our eyes, which is done automatically “Sympathetic System”. Convergence is the mechanical ocular function that allows binocular fusion when looking at close objects, and it is also performed automatically when we look at objects located about five meters or less, so that within a small room, we will always be converging to a greater or lesser extent.

But our eyes cannot look outwards, “divergence” because to look at infinity we need both of them to be in parallel position, so it is especially important to adjust the parallax to avoid showing a greater distance than our interpupillary distance.

“In the real world convergence and accommodation always go hand in hand.  If we look at a short distance our eyes will converge and accommodate simultaneously, but this does not happen when we see a stereography. If we use a mobile phone and VR equipment, our eyes will focus on the screen because that is where the image is produced, but keeping that focus we will converge on the different objects (planes) of the composition. This fact causes a continuous work of our optical system and sometimes there is an ocular fatigue derived from this phenomenon”. 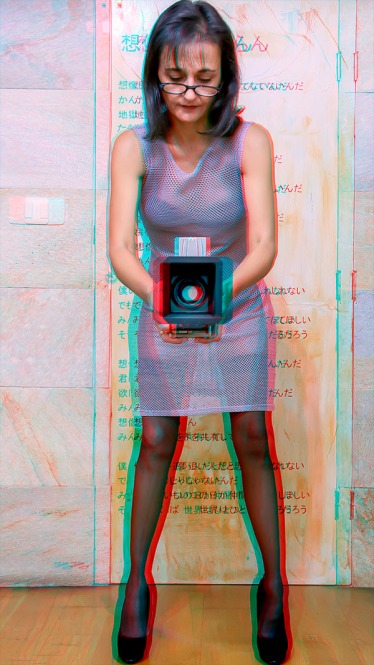 To see this example it is advisable to use anaglyph glasses (Red/Cyan).

We know as neutral parallax or zero parallax the elements represented in the plane of the screen, such as the model’s eyes that do not present color halos.

The positive parallax is everything that is represented within the screen, or as we usually say “within 3D” and its parallax is the distance that separates the red halos from the cyan.

The negative parallax is everything that tries to leave the screen, like the “Hassy”, and the larger the halos, the greater the effect.

This parallax configuration can be modified and adjusted during postproduction and in the next section we will learn how to do it using equirectangular images.

We know Orthostereography as the capture made imitating the human vision, which implies an interaxial distance of 6cm to 7cm.

If we are using inreaxial distances of less than 6 cm, we are talking about Hypostereography, a technique that we will use indoors.

If on the contrary we are using stereoscopic bases of more than 7 cm we will use Hyperstereography, and we will use this technique when we work outdoors using poles.

In the 1950´s  the filmmakers faced a complex problem, the cameras were so big that when placing them one next to the other the interaxial distance was excessive (hyperstereography) producing effects of steriopsis of miniaturization, which was  the reason why they had to resort to the same system that Charles Wheatstone had used 100 years before, a system of “mirrors”, that was denominated “Beamsplitter”.

But they are not exactly “mirrors”, they are glasses placed in limit angle of refraction, that for a glass of refraction index 1.5 is of 42,5º, this allows that one side of the glass behaves like a crystal and the other like a mirror. In the photos above we see three different configurations with the same result, the possibility of working with interaxial distances ranging from 1mm to hyperstereoscopic distances.

Thus, in the 1950´s the concept of Orthostereography was banished and work began with interaxial distances adapted to each scene, as it was shown that to make close-ups it was essential to reduce the interaxial distance as the safety distance was reduced proportionally. 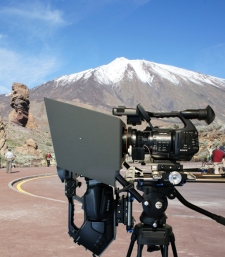 When the filmmakers of the 1950´s began to work with variable interaxial distances they established several rules due to experimentation, and one of them was the calculation of the interaxial distance for each shoot, establishing a constant that has been experienced in stereopanography and is still in force, the constant 30.

If we multiply the interaxial distance by 30, we obtain the safety distance that will avoid both hyperconvergence and divergence.  If we are using 4cm of interaxial: 4 x 30 = 120 we must respect a safety distance of 1 meter 20 centimeters. If on the other hand what we want is to calculate the interaxial distance with which we must work, what we will measure is the distance to the first element of the composition  If a column is 1.5 meters from our camera we will divide this distance 150 by 30 and get the distance of 5 centimeters.

We already know that our eyes can converge but cannot diverge, however convergence has a physiological limit, so if we overcome it, the viewer will stop seeing in 3D and will see a double image.

If we do not respect the safety distance and have close-ups very close to the camera, there will be no way to repair the shot in postproduction, because it will present us with Hyperconvergence or Divergence. 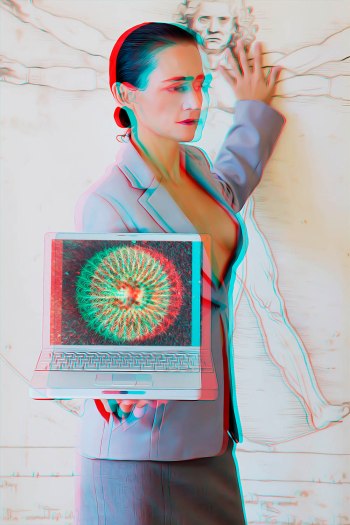 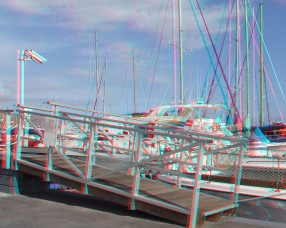 In traditional stereography we work with delimited margins in which the elements in negative parallax should not touch the window frame, because the stereopsis magically disappears-  In the following example the parallax is the same, but the window breaks the stereo effect. 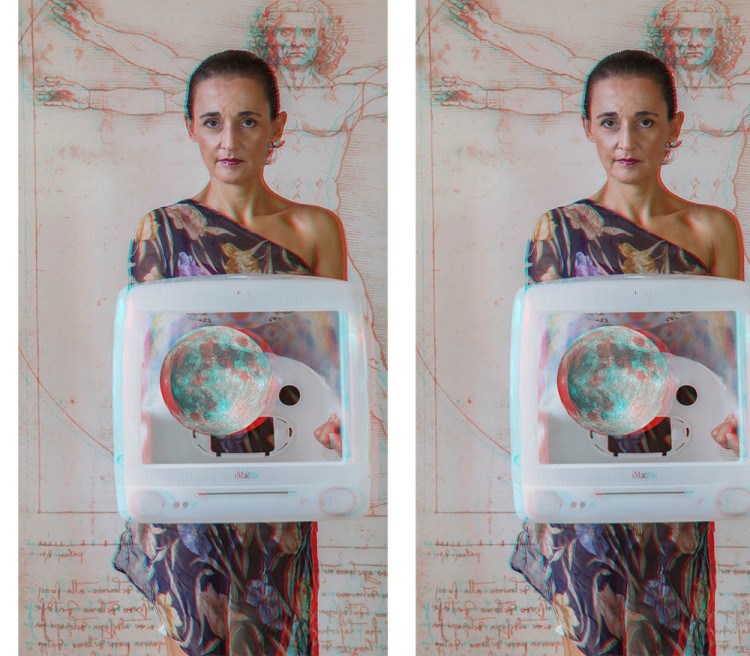 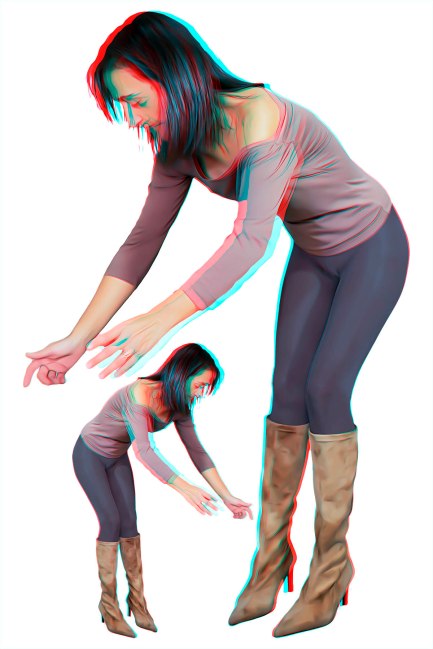 Now we’re no longer working with “Postage Stamps” flat pixels, we’re working with volume pixels, “Casino Dice” square pixels, and we’re creating a volumetric image. Now our equirectangular projection is not a plate, it is not a map, it is an orthohedron, and logically the size of the panorama will affect its depth.  This we see very easily on the side image, the larger its size, the greater its perception of depth.

An important rule to respect is to check the stereography on the same screen on which it will be displayed, as depending on its size and the number of pixels this will vary. Performing the calculation in traditional stereography is simple, but somewhat more complicated in a 360º environment, as we will see later. 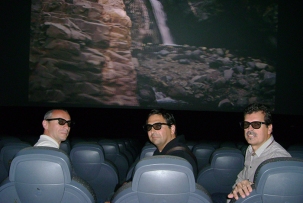 In summary, to calculate the native pixel paralax, if we are going to project on a screen of 8 meters and we are using an interaxial distance of 6cm, we must divide the 6 centimeters between 800 and we will obtain 0,0075 that is a 0,75%, so if we are projecting in flat format DCP/3D whose width of pixels in screen is of 1998px, we will not be able to use a positive parallax greater than 15 pixels, since its representation on the screen will overcome our interpupillary distance creating a positive divergence, which translates into a blurred image even though it is perfectly focused.

Disparity is a word hated by stereographers because it indicates that something appears only in one of the two images, the right or the left, and the only disparity that stereography tolerates is the paralax, so any other disparity will cause the appearance of strange effects that will break the magic of stereography.

This is a graphic summary of the most typical disparity that I have found in 3D 360º: 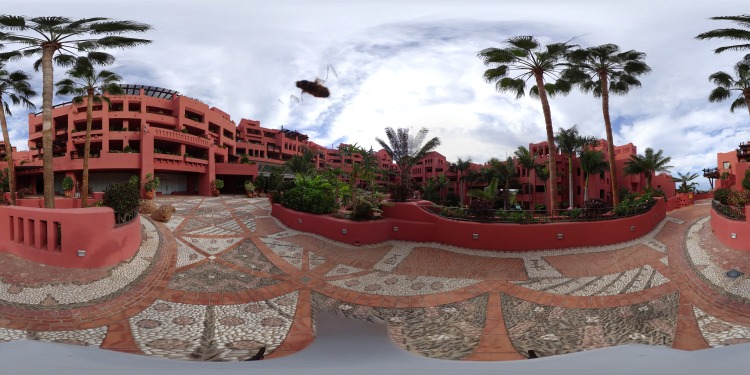 It is not usual for a UFO to impact with one of the optics at the time of capture. 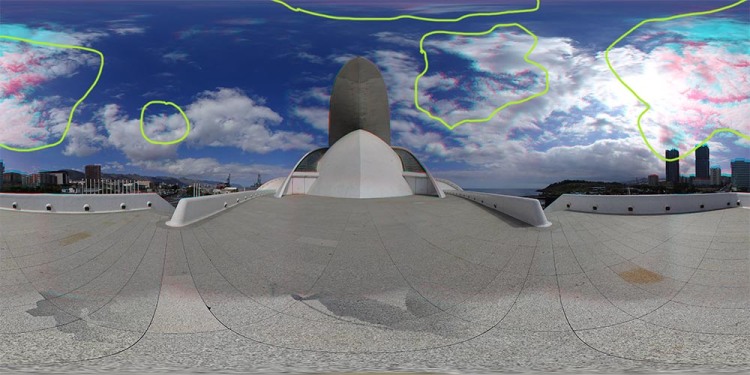 The wind will always be our enemy.

Moving water is another problem. 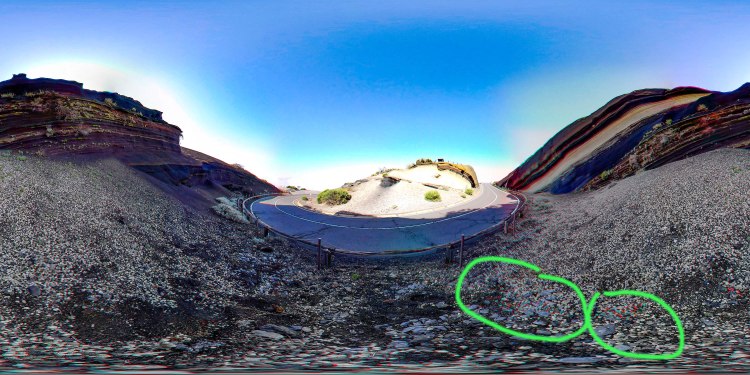 We should not walk around the tripod when it is on sandy surfaces, as the parallax varies and stereoscopic ghosts appear. 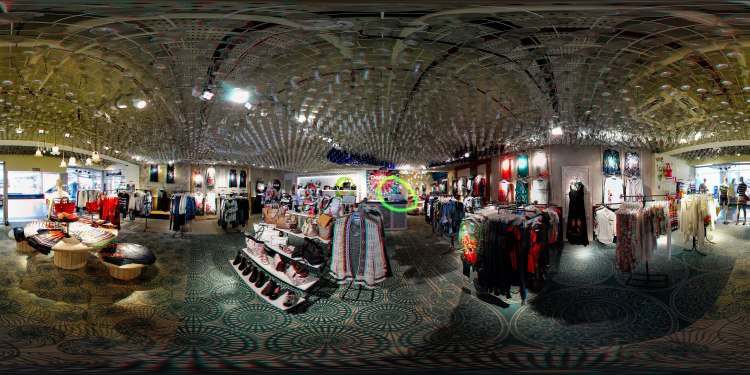 In this case the sales assistant only appears in the image on one side. 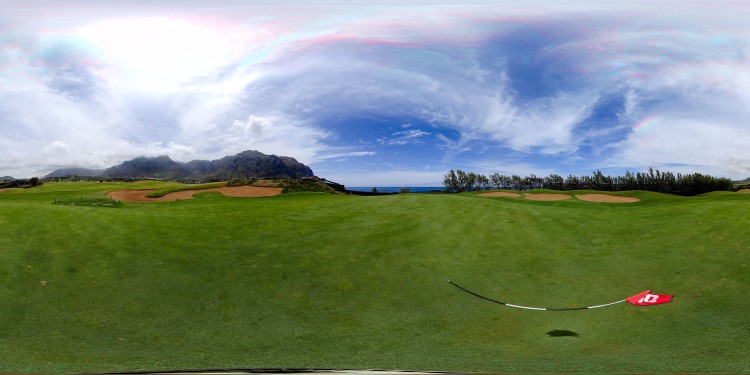 The management of shadows in full sun is also complex, in this case I do not have enough material to clean my hand shadow. 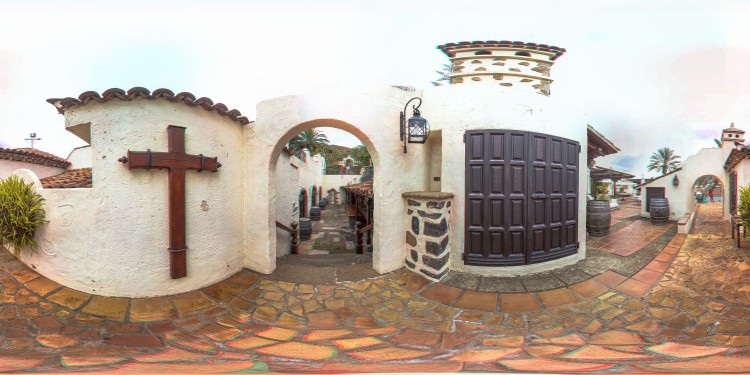 If there are kids playing around, don’t worry, they’ll be in the picture no matter what you do! 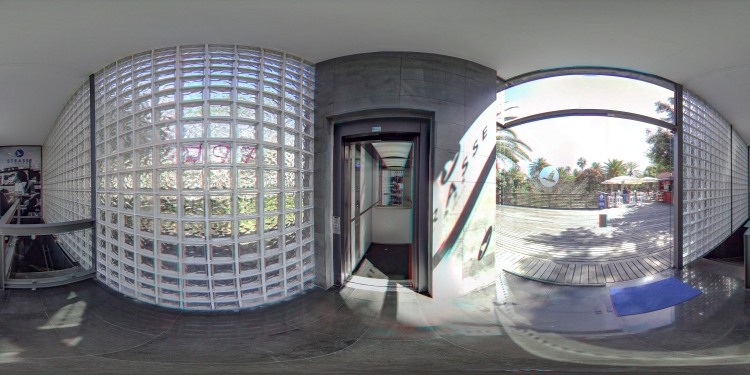 Crystals, shadows and reflections do not work well in stereoscopic mode.